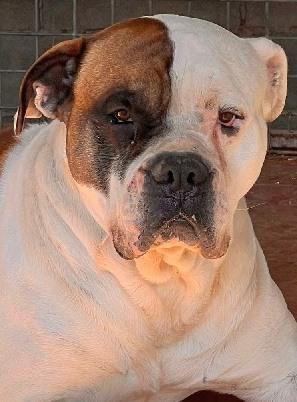 Pirata is a handsome and unmistakably beautiful male! He was picked up alone on the street with a spiked collar by the local police. Pirata was chipped and so the shelter manager Georgina and the police tried to contact the owner. There was never a call back, no one came by to check on the male. Therefore, we assume that he was intentionally abandoned. A fate that especially often befalls beautiful dogs or "fashion dogs", as these are often acquired without thinking and quickly end up on classified ad portals or are handed over to killing stations and animal shelters.

The shelter volunteers don't understand why such a great dog ended up on the streets. Pirata is very calm, loving and cuddly. He is unaware of his size and often tries to play "lap dog". Georgina says Pirata is a real jackpot in the dog lottery.
Pirata is still learning leash walking at the moment. He is a bit impetuous at first, pulling a bit on the leash. But this settles down after a few minutes. Georgina thinks it is just the great anticipation on his part. In the shelter he gets along great with male and female dogs, but he should be alone when feeding - if a dog looks too much at his food, he reacts with growling. Pirata should not move to a family with cats - he does not like to eat them, but he chases them.

Can you imagine giving Pirata a basket forever? He travels like all our dogs chipped, vaccinated (rabies and 5-fold), neutered, dewormed and equipped with EU pet passport into a new life! Ariane Thoma, Piratas mediator, is looking forward to your call or mail. 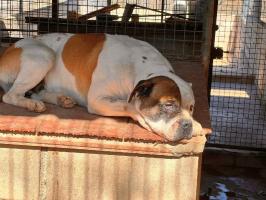 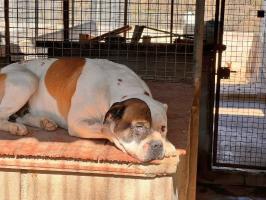