New emergency from the Albayyasa shelter in Baeza

A 3.5 kilogram dog was simply left in front of the vet's door in Baeza. The vet immediately informed the animal welfare organization Albayyasa, with which he has been working for many years.
Irresponsible people just left him to his fate there - they probably thought that the vet would put the mouse to sleep - of course without paying a cent for it - how cruel people can be. It's unbelievable every time!
The poor little guy must have been in terrible pain before he was found and helped….

The poor guy couldn't get up and run away at first because three of his legs are inoperable. She was also diagnosed with a bad hernia, for which emergency surgery had to be started immediately, otherwise he would have died.
When he has recovered from this operation, he will be presented to a traumatologist in Jaén to see what can be done with his three little legs.
Of course, he can't walk now either and is given pain medication three times a day.
We were now allowed to name him Finley.

One of the three legs was completely broken, but two others still have to be operated on.
A cost estimate from the veterinary clinic in Jaén is available for these three operations.

Thank you very much, the team from Albayyasa and, if he could, little Finley too.

The Albayyasa animal shelter has also filed a complaint with the police and is trying to find the culprit, which should not be easy ...

Since the costs would exceed the budget of the animal welfare organization, we would like to ask for donations, which you can transfer to our account:
Tierfreunde Europa
Postbank
IBAN: DE83 6001 0070 0969 1397 09
BIC: PBNKDEFF

As always, we will list every donation on our website. If you want to donate anonymously, you can also do so - simply enter “anonymous” in the subject. All donations are then transferred 1: 1 to Spain, because we all work purely on a voluntary basis and even without office workers.
As we are a non-profit association, donations can of course be stated and taken into account in the tax adjustment.

If everything went well and little Finley can be transported, he can come to Germany. 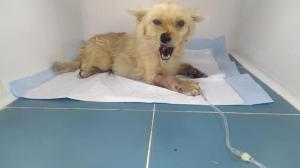 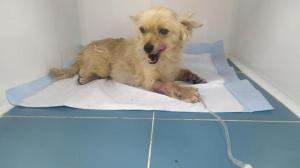 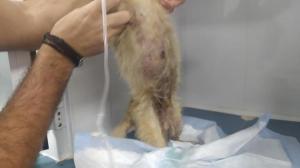 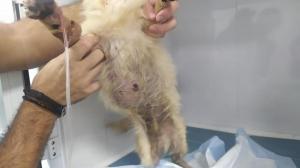